Housing Minister Shocker: It's Official - Now It's Bum and Bust! 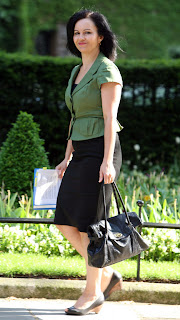 Imagine what life held out for you when, as a fresh-faced 22 year old with a backwoods degree in American History and Film Studies, you stepped on to the career ladder as an Equal Ops Officer for Lambeth Council. A modest move follows a few years later when you get a job heading up the Women's Unit at the NUS and then, in your 30s, you progress to the GMB, as its Senior Researcher and Political Officer. Bit of a dead-end? With a useless degree and CV as a right-on Jobsworth that no commercial enterprise would touch with a barge-pole, what's left but to see things out till pension-age, possibly with the occasional Guardian column on the side and a few appearances as an guest-expert on BBC FiveLive to top up the salary? Not much?

Ah, but if you'd joined the Labour Party as a kid, and swum with the political tide as it ebbed from the lunacies of the Michael Foot years to the glossy pragmatism of The New Labour Project... wouldn't a safe constituency beckon? Then, with success in the 1997 landslide, plus a few year's brown-nosing as a PPS, a Cabinet Post must surely follow for one with a telegenic face. Sure enough, our Minister of State for Housing and Planning, Caroline Flint, has made that very journey.

And doesn't she typify the New Political Class? A government stuffed full of people who've never known what it's like for their livelihoods to depend on the value of their contribution to the viability of their employer's business. People who have only ever known the comfort of belonging to organisations which, when faced with rising costs, have the luxury of being able to put up prices to their customers - who must pay the extra or be sent to jail. People whose policies have never been put to practical test so that outputs, not inputs, can be the measure of success. No wonder the briefing note she accidentally revealed yesterday mentioned only the symptoms of the housing slump but gave no clue as the what Ms Flint (Whose hubby is paid the thick end of £40K as her office manager) thinks is the actual problem that needs addressing. No wonder the tired old New Labour mantra, "it is vital that we show that at this time of uncertainty we show that we are on people's side" is the conclusion.

They are people whose whole working lives have been spent, directly or indirectly, serving the Party which is now the Government, their Government. Long to reign over us, if they have anything to do with it. Promoted beyond their abilities, self preservation seems to be their only motive for clinging on to power.

But isn't it always thus in politics? Remember the last years of the last Tory reign? They're all arseholes.

All Shook Up said...

I do remember. I can only speak for myself.. I never felt so oppressed as I do by this bunch of lying, cheating, swindling bunch of incompetent policy wonks. Off with their heads!

"...self preservation seems to be their only motive for clinging on to power.