I killed a man
Called One-eyed Chan
In a bar-room in Manila
I went ashore
With my forty-four
And blew his brains out on the floor
His girl cried out, “You shot my love,
You dirty low-down killer.”

Then once when on
The Amazon
I met a man named Sailor John
We used to eat
Dead monkey meat
Rotting in the jungle heat
It made him sick
He died one night
I buried him. He’s gone.

I made that up
Another lie
I’ve never seen a person die
Or dug a dead man’s grave.

In '92
I took the view
That mining was the thing to do
And then the price of silver soared
I sold off all my bullion hoard
And bought a seat upon the board
Of companies investing in
Oil and gas and coal and tin
More and more the money poured
Into my banks in Liechtenstein
Where interest gathered
Mine, all mine

I think I kissed
A girl called Kate
Who had an Argentinian mate
Whose tattooed ears and braided hair
Made him welcome everywhere.
Kate was charming and I’m sure
She would have let me kiss her more
If only I’d been rich


Do you remember when we met?
I hope you do ‘cause I forget
I’ve been so many people that
I can’t remember where I’m at
I try to do what’s right, all right
It’s harder in the depths of night.
As everyone who knows me knows
I’m true as true as true can be
So long as people all agree
That I know them and they know me

Posted by All Shook Up at 11:14 am 0 comments Links to this post 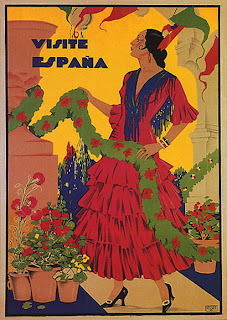 Valencia was beautiful. The streets are lined with grand buildings covered in elaborate carvings and encrusted with balconies edged with fancy wrought-ironwork. Shops selling high-quality goods are everywhere and, especially in the evening, people swarm among them filling the pavements, bars, cafes and restaurants with noise. I spent a day in Placa de la Reina, the open square in front of the cathedral, while Mme. went shopping. As I arrived, I was straightaway accosted by one of the gipsy women who beg there. She was small, slightly built, was wearing the typical long skirt, shawl and headscarf and carrying a photograph of her bambinos, which she kept thrusting at me as she pleaded, in the faint sobbing voice they use, for money to buy bread and milk for them. A few steps later, another began entreating me with the same patter. They are persistent and it’s hard to know whether to sympathise with them in such an affluent country as this.

I sat on a low stone wall and watched the world go by. Two young lovers sat on a bench facing each other, cross-legged, knees touching. The occasional knot of Japanese tourists walked past, looking as bewildered by everything as they always do. I suppose the culture is so different from their own that they can’t appreciate subtleties. Yesterday, for instance, during a service in the cathedral, a Japanese girl was posing in mock prayer to have her photo taken by her boyfriend, oblivious to the offence she gave to the worshippers. Still, to be fair, there’s a relic in a glass box behind the altar, of San Vicente the Martyr. It’s the skeletal remains of his left arm, neatly sawn off just below the elbow. And I’ve seen the displays of piety it inspires among the throngs of Catholics who look wistfully at it but I can’t see the point, either.

Three buskers; clarinet, alto-sax and accordian, played a free-form jazz version of Jingle Bells. At about two o’clock, the square’s occupants began to switch sides. The sun had moved from warming the pavements outside the cafe’s on the west side so it was the east side’s turn to get the customers. In the summer months, the opposite would be true as the eaters, drinkers and loafers fled the afternoon heat of the east to the cool solace of the west’s shadows. I sat at a shiny steel table and ordered a beer and a seafood paella.


Another beggar arrived, an old man. This one lifted the bottom of his jeans to display his leg, with a hideously yellowing wound on it. But he had a dog with him that I felt sorry for so I gave him a euro. A couple more beers and nothing much happening. Cock pigeons cooed, strutted and posed around their hens and were disdainfully ignored. Petunias belied the time of year by blooming in the flower-beds. Orange trees were laden with fruit glowing as if they were Christmas decorations. Church bells lazily tolled the quarter hours. Taxi-drivers dozed in their cabs waiting for fares. Groups of families and friends pulled tables together – the women all gathering together at one end so as to exclude the men from their chatter. I tried to scribble more notes but gave up when I couldn’t come up with anything less cliched than ‘honey-coloured’ for the stonework of the cathedral so went back to the hotel for a nap.

That evening we went to the circus. In England, circuses have all but died out thanks to animal acts being deemed Politically Incorrect. I’d wondered if the same would be true here but, if I’d thought about it, the fact that the bullring was the venue should have reassured me.

This one was a magnificent affair – with a proper Ringmaster and attendants and programme vendors dressed in gold-braided uniforms as if they were the Prussian Cavalry and at least a couple of thousand of us were packed into the Big Top, set up on the blood-soaked sand in the centre of the arena, to see it. First up was, of all things, a contortionist. She writhed, wriggled and twisted so that her limbs seemed ready to burst from their sockets. I’m glad I never married one now. Thoughts that used to make my mouth water now make my eyes water instead. It’s not that the urge lessens with age.... just that I’m not as bendy as I used to be. We laughed at the clowns’ antics, marvelled at the dare-devil tumblers and acrobats, gasped in awe-struck amazement at the death-defying feats of the high-wire act. We loved the massive, docile elephants, cheered oddball Professor Blick and his assorted performing dogs, thrilled at the Cossacks jumping on and off their galloping horses and, best of all, admired the pride of lions and Bengal tigers and their fearless, glamorous, whip-cracking, high-heeled, long-legged, scarlet-sequinned and top-hatted trainer. You just have to have animals in a circus. Without them it’s like sex with your socks on.

Afterwards, we walked back through still-crowded streets towards the hotel – a white-painted wedding-cake of a building, formerly a ducal palace. 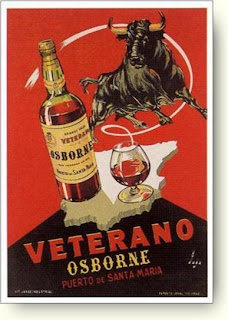 We called in at a nearby bar for a brandy. Now then... Spanish brandy is a favourite of mine. People who think themselves connoisseurs sneer at it, considering it to be an inferior version of the French stuff. What they fail to realise is... it isn’t supposed to be French.... it is a sweet, fragrant, caramel-flavoured liquor in it’s own right and should only be appreciated as such. Even better, here they dispense it in huge balloon glasses and you get at least three times the amount compared with bars in France. Anyway.... this bar was an exclusive sort of a place. With its own doorman, even. Inside, it was all low lights, marble floor, dark wood, leather and brass in a room full of well-scrubbed men in cashmere and women flaunting their tightly-trousered behinds in expensively tailored suits. They were listening, or dancing, to a duo on electric guitar and bass playing well-worn rock standards. If you can picture in your mind a bar in downtown Atlanta with a couple of good old boys trying to do Flamenco in phonetic Spanish... you’ll get an idea of how out of sync these two sounded. Un-authentic. I bought a Havana, trying to fit in, and smoked it as nonchalantly as I could manage. Some places you feel at home in, some you don’t.

Posted by All Shook Up at 11:19 am 0 comments Links to this post

These beautiful creatures, full of life and menace, are high on a church near Boston, Lincs. They were carved in about 1390 by a craftsman whose name we'll never know.

There are hundreds like them on thousands of medieval parish churches in every county of England. Monsters and monarchs, saints and sinners, everyday people in an array of satirical, threatening, humorous and occasionally obscene poses. They date back centuries. They have been a free outdoor art gallery for generations. But they are disappearing fast. At least half have already fallen victim to wind, rain and air pollution and the rest are at serious risk of decay and disintegration. 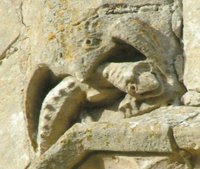 This one is above a doorway on a neighbouring church. What is it? What might it signify? Who commissioned sinister beings like these, and why? Are they reminders of the beasts from Hell? Or a harkback to paganism? Who knows. Their meanings have been lost over time and now stand only as tributes to their artists' creativity, talent and imagination.

A face looking out eastwards from high on the roof of Burgh Le Marsh Church; across the Fens, over the Wash and onwards for ever. It has features similar to those of the Green Men that are found almost everywhere in Medieval carvings both here and abroad.


There is no effort being made to preserve exterior carvings like these. The structure and fabric of church buildings do receive a share of scarce funds for maintenance. Religious architecture is appreciated and preserved. But works of art such as these three above are neglected and will soon be gone forever.

Posted by All Shook Up at 1:31 pm 0 comments Links to this post