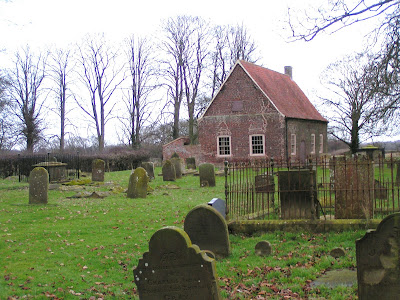 "Why should our eyes with sorrow flow, Bosoms heave a sigh?
When Jesus calls the saint must go, Eternal gain to die."


There's not much so unsettling as contemplating your own demise. It's bad enough having to think about how it's going to come, let alone when. So imagine having the confidence to put the lines above on your tombstone - at least you'd be able to expect that, as long as it wasn't too painful or soon, you'd have the pleasure of waking up in the Elysian Fields feeling smug that you'd backed the winner when all about you, they'd scoffed at you for keeping your eyes shut during prayers.

I find myself being drawn back here quite often, wandering among the graves of the Hepzibahs, Azubahs, Ezekials, Hezekiahs and Jeremiahs sleeping soundly below, waiting for their triumphant wake-up call. It's close to where I live, disguised as a farmhouse in a tiny hamlet and deliberately hidden away from main roads so that a watch could be kept against intruders. They built it in 1701 and, in its way, it's as inspirational as the soaring Gothic spires of the churches its builders were shunning. Non-conformism was heavily frowned upon still, and their version of faith, with its emphasis on a personal revelation through scripture, surely also meant that they rejected the well-ordered certainties of the of the State itself, as well as its established religion and ritual. It must have meant much to them, for them to have traveled so far for their worship, on foot or horseback, from towns and villages many miles away. They would have been people whose temperament led them to question the status quo, resent dogma, and find strength in their difference.

It's almost impossible, now, for us to understand how faith in the Bible could have been so solid and resistant to challenge. Today, we intellectualise our beliefs; subject them to test. Almost everything we 'know' is based on reliable evidence and, if it isn't, we are pretty sure it could be if we looked for it. But back then, 300 years ago, when people were every bit as intelligent and imaginative as we are today, it was still possible to believe in an afterlife as certainly as we believe we'll wake up in Edinburgh if we take the night train from Kings Cross.

I think I envy them, a bit. Maybe that's why I find my way to this place so often... on cold winter Sundays, to park at the end of the grove of sycamores leading to it, walk the dog around the fields, and return to sit in the car for a while with a flask of hot tea, until it gets dark and shadows flit between the headstones. Just to try to absorb some of the 'goodness' that seems to imbue it.

I won't mention its name. If you recognise the photo, you'll know it.

Posted by All Shook Up at 6:46 pm 2 comments Links to this post

Hello, how may I help you?

If doctors are baffled by the wave of stress-related illnesses, hypertension, heart failure, apoplectic seizures and suicides gripping the country, the answer is easy. Forget binge drinking, the obesity epidemic and the credit crunch. If there's anything that should be labelled with a H.M Govt. Serious Health Warning, it's: 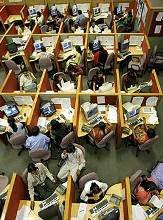 
Despite all previous experience, I rang one this afternoon and I'm only now able to write after half a bottle of vodka and a lie down in a darkened room. So... last week I opened an online bank account with a new provider, see - and today, they sent me my 5 digit PIN. And in the letter, it said, "We recently sent you your new 8 digit Customer ID and with it, you'll be able to manage your accounts round the clock." What could possibly be simpler?

Well, I've never had the ID, so I rang the Helpline; the one that says, if you haven't heard from us ring this number.

So we went round this ever-decreasing circle a few times until I asked for the supervisor. "Can't put you through without your ID, he won't speak to you".

I don't believe him. I think he's just too thick to look at B(2) on his tick-list when the answer to A is negative, that's all. Naturally, eventually, he cut me off when my frustration descended into head-banging anger. Maybe he's in Bangalore and only understands me by way of being familiarised with Britain through a few brief episodes of Eastenders and Footballers' Wives. Or for all I know, the poor sod's in Balsall Heath and has a degree from Wolverhampton Poly. Either way, he's at the sharp end of a £multi-billion corporation and losing it business. Their problem, not his. His is being in a dead-end job where he hasn't brains enough even to make it tolerable by relating to customers' needs.

Ah well. Financial products are throwaway; frothy insubstantial things; novelty notions; little more than a marketing whore's profit-concept. They aren't cuddly, funky, spunky, feminine, caring, cute, sexy, posh, cheeky or any other hyped-up phony brand-characteristic that clever admen ascribe to them - they just either do the job or they don't. Plenty more where that one came from.

Posted by All Shook Up at 4:50 pm 3 comments Links to this post

Fanning the Flames of Harmony 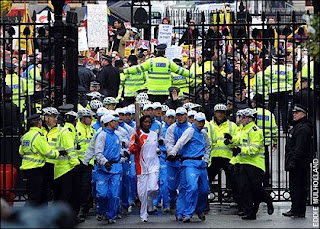 I have to say, I'm enjoying this. The sight of Gordon Brown and Tessa Jowell cowering behind the gates of Downing Street while a phalanx of Chinese heavies barge in with the Flame of Harmony tickles me no end. Of course, Gordon never actually touched the torch - thus keeping a quarantined distance from it as he did from the Lisbon Treaty by showing up late for the signing. And for Jowell, the whole farce was "a good thing", because as she puts it, "Within the values of the Olympic Games of internationalism, of tolerance, friendship and excellence, all that is incompatible with circumstances where the right of free expression is repressed in any way" whatever that means.

What's so appealing and attractive about stunts that go so haywire as this one inevitably would, is that everyone knows how cringeworthy they truly are and we get to see paid hypocrites like those two having to come up with words that we know, they know and we-know-they-know-we-know are a complete political sham. The round-the-world torch parade, remember, is not being sponsored by the Olympic Movement, but by the Chinese Government itself as a promo for its hype-over-substance vision of its new enlightenment. And that's what the Olympics has become. Amidst the undoubted (leaving aside the drugs cheats) quest for sporting excellence, it's an excuse for nationalistic tub-thumping and a political prize. Thats why the Games were wrested from the French and are coming here in 2012 to the tune of £9.3 billion, thanks to Jowell's sketchy grasp of arithmetic.

I see that in Paris, protesters extinguished the Flame four times before the rest of the event was cancelled in a hail of tear gas canisters. Predictable; no change there then. I happened to be among the celebrations in Place de la Bastille when France won the European Cup a few years ago. On the stroke of midnight, the Gendarmes got fed up with the thousands of us blocking the roads and teargassed us out to get us moving. Nobody seemed to mind, all went happily home. It's the French way. 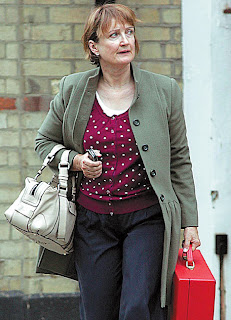 Whilst looking for a pic of our Olympics Minister, I found this one.

What is it about her that makes her look so chic and a la mode, I hear you cry. Well apparently it's her handbag. It's a Chloe and they run out at £500 a time. Yesterday she turned up in a 70s style parka, rabbit-fur collar and all.

Posted by All Shook Up at 4:28 pm 7 comments Links to this post

Oh dear, one of the uncalled for perils of blogging is that it's a telling reminder of how varied and interesting your life is. Or not. Can it really be that the most blogworthy happening in a whole month was last week's visit to (the aptly named) Grimsby?

Yes, but there's a reason for going. Fish, of course. Wholesalers on the docks there will retail you the stuff for a tiny fraction of what you'd pay in a shop - even assuming that you could find one and fishmongers weren't almost extinct. So we take a couple of cool-boxes and stock up with all the stuff that's normally only available in French supermarkets even though it's landed in the UK... crab, langoustines, coquilles St. Jacques.. mackerel, sardines, sole... Luvverly. I'm having a craze on cooking with fresh ginger at the mo. and seafood is just sensational with it.

A Visitors Guide.
Whilst there, it's a good idea to mingle with the friendly fisherfolk and take in the quaint architectural gems of this unspoilt harbour town. 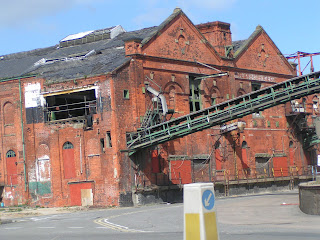 Those other famous mariners, the Venetians, were obviously influenced by Grimsby when designing their (much smaller) Campanile in St. Marks Square. 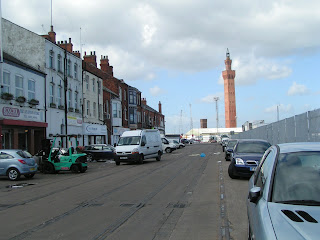 And afterwards, what better way to end the day than to join the throngs for a stroll along the promenade at chic Cleethorpes, nestling next-door along the picturesque Humber coastline. 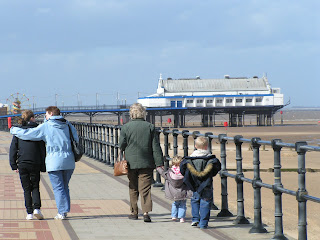 What is it with this bloody country. If Grimsby was in France, it would be Marseilles and you'd sit in a quayside bar slurping bouillabaisse, with warm crusty bread and a pastis. If Grimsby was Spanish, it would be Pontevedra and they'd bring you calamares and the delicious little percebes, that taste of the sea itself and which the locals defy death to harvest from the wave-lashed rocks. Even if Grimsby was Belgian for gods sake, it would be Ostende and you could get a bowl of mussels and chips with your choice of beer. But Grimsby is British. So oh no, not so much as the chance to sample the fresh-caught herring it's supposedly famed for. It's also famous for being the Home of the Fish Finger, though, a mainstay of local cuisine. Plenty of them on the menus.


PS Ann Keen MP.
Had quite a few hits, lately, looking for info on this old bird. Probably due to both her and her husband each claiming an Additional Costs Allowance towards their pied a terre in Central London - despite living only a few miles away from the Commons in Brentford. Between them, they pull in about £40K a year in extra expenses for its upkeep. Not bad. No wonder they're on the Speaker's little list of those he's trying to keep quiet about. Ho hum. We're under the thumbs of a political class, nowadays, whose idea it is that they rule over us. Snouts. Troughs.

Posted by All Shook Up at 4:18 pm 4 comments Links to this post