To Hull and Back

I was on my way to the Theatre Royal in Nottingham on Wednesday for Boeing Boeing, a fluffy farce set in the comforting innocence of the 60s. There's a spontaneous shrine where you step off the tram, to a youngster beaten to death outside a nightclub in the early hours of last Sunday morning. Bouquets are piled up against a traffic sign, which itself is covered in graffiti tributes. Letters of condolence and notes addressed FAO the deceased, mostly written in text-speak, mourn his loss. All around it are thoughtfully placed bottles of his favourite tipple (empty), complete with convenient paper cups, to smooth his progress to heaven. And this weekend, hundreds gathered in tribute to his memory; some in cars playing his favourite tracks on their stereos. Dozens, including the Nottm. Forest Football Club Captain, are reportedly having themselves tattooed with his name and date of death.

Without meaning any disrespect to the life cut short, all this could just as well have happened in some distant land and be one of those foreign rituals like when you see Palestinians running along carrying shrouded bodies above their heads. I've become so completely disconnected from urban youth culture that I can only comprehend an event such as random street manslaughter on a basic level, much as I might view the carnage in Gaza with pity and a squeamish horror whilst safe in the knowledge that it's somewhere else entirely. Interesting that they seem to share a belief in an afterlife though.

The vomit, spit and urine-stained pavements of Nottingham are mirrored in Hull, where I was on Friday for a concert by the Halle. Their City Hall is more classical in style than the ornate Victorian Phipps/Matcham interior of the Theatre Royal but the message in the design is much the same - with a relief over the stage showing the Muses paying tribute to Britannia seated on her throne, while the Royal was built (according to its first owners) to "add to the number of those who seek a healthful pleasure in intellectual recreation". Each venue embodies the conscious effort to heighten the public's spiritual wellbeing through art, from an age when it was believed that this was both possible and necessary. We've come a long way from that sentiment.

Posted by All Shook Up at 5:03 pm 3 comments Links to this post

It depends, of course, on the public being a willing participant... willing to connive in the absurdity of what's being portrayed and to allow themselves knowingly to be manipulated accordingly. It's an equal covenant which, when broken, can't be repaired. Once the fiction is admitted, there's no going back. Everything that's been expected to be believed, even the parts that may or may not have contained a germ of truth, appear as no more than a sordid attempt to profit from gullibility.

I haven't blogged since the last trip to Spain - mainly because of idleness but also because having seen what I'd written previously, I found it hard to believe I could have felt a need to comment on serious affairs. Life is so full of opportunities for pleasure, that it seemed wrong to concentrate on matters which, unless I read about them somewhere, barely impact on me at all. Maybe it's our duty to vicariously share the horrors of Palestinians, the war-ravaged Congolese, Sudanese, Ugandans, famished cholera and Aids-ridden Zimbabweans, the downtrodden and oppressed everywhere, the rape of the planet or even the lesser outrages of society within Britain - but I've all but given up. The direct experience of most of us inside the comfortable English bubble is so wonderful, with every enterprise set up to gratify some whim or other that, truly, we've won the Lottery of Life simply by being here.

But anyway as I was saying... Kayfabe. Our Government tells us it's expecting to borrow £60bn this year and a further £100bn next. Many other countries in Europe will be doing much the same. In the US, as we know, Congress famously approved an extra $700bn of borrowing to fund the bail-outs. Obama says he's going to spend a similar amount on New Deal style projects - in addition to the regular Federal deficit of a $trillion or so. So I dunno... how much new Global borrowing does all this add up to? Couple of $trillion? Five trillion.. more? All this on top of an existing debt mountain of $what? So the ever-so-simple thing is - where's it all supposed to be borrowed from? No such sum of money waits, ready to be invested, anywhere in the world. That's bad kayfabe. People would feel cheated if they could be arsed to look into things like that.

What people really want to buy into is being kayfabed into what to drive, wear, eat or watch on TV; what phones and ring-tones to use, films to watch, bands to be a fan of, names to call their kids. Without kayfabe here, they'd have to make their own choices - so that's good kayfabe. It saves people from having to make up their mind what's cool - kayfabe-cool - because they can follow the human herd-instinct and join with millions of the like-minded by keying in to a few simple signals. Buy this and be that, goes the message - and straight away the world defragments for us and we're part of one modern-day tribe or another; no longer isolated. 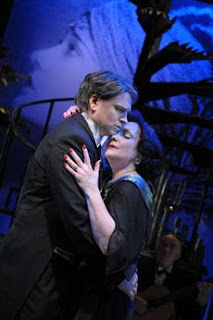 Sunset Boulevard, at the Comedy, is well worth seeing if you can, if only for the towering bravura performance of Kathryn Evans as Norma Desmond. The onstage ensemble play the whole score, as well as act the piece. Just bewilders me that there's so much unknown talent - these people have spent the years I wasted as a youth, learning instruments to professional standard as well as taking dancing and acting classes. They go through a ruthlessly competitive audition process and then work to a standard of attention to detail and public scrutiny that would defeat most of us in our own jobs. All this for a pittance wage and complete insecurity of employment whilst producing something quite magical through their connection with an audience. I'm humbled by admiration for them.

Posted by All Shook Up at 12:35 pm 2 comments Links to this post