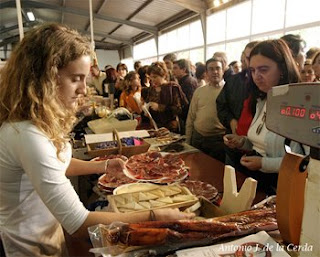 Not everyone would base a short break on a distant Ham Festival but this blogger did. And either "Durante el tercer fin de semana de octubre de cada año" on the Aracena Ayuntamiento's website doesn't mean what I thought or one of us got the dates mixed up. Whatever, having driven deep into darkest Extramadura from Malaga Airport, the annual Feria Regional del Jamon y del Cerdo Iberico turned out to be a no-show. So faced with another cold night in the Alcatraz-like hotel I'd booked and minus an attraction to make the experience worthwhile, we checked out hurriedly and blazed south to the warmer and more welcoming climes of Jerez, knowing that there we'd be assured of a perfect stay there thanks to the ubiquitous influence of its Alcaldesa.

OK, I know appearances aren't supposed to mean everything. But doesn't Senora Pilar Sánchez Muñoz (left) look like the kind of Mayor who could be trusted make sure that if it said there was going to be a Ham Fair on the third weekend of Oct., a Ham Fair there would be - or else. And an elegant, sensible, properly-run affair it would be too. Just like Jerez itself, in fact.

If I say that, these days, Jerez looks like the sort of place someone like Senora Pilar would be happy in - I'd mean it as a compliment. Bright clean plazas, great service and food in bars and restaurants from the humblest up, no drunks, no vomit-stained pavements. And I like her latest innovation - instead of a flashing light that makes you dither nervously about whether to run-walk across junctions to avoid being mowed down by eagerly revving drivers waiting to beat each other to the green light, there's now a second-by-second countdown giving you a fair chance to work out whether you can do the 30 metres in Sub-Olympic standard or die in the attempt.

Bugger policies. I'm going to treat politics as a beauty contest from now on. Otherwise we finish up with horrible old tarts like Jaqui Smith, who looks as if she owes her flopping cleavage to an excessive taste for kebabs and still is clueless. Time to stop being tactful about appearance and go for the lookers. Give me fragrant Alcaldesa Pilar and pistol-packin' VPILF Sarah Palin, every time. At least they improve the scenery.

Posted by All Shook Up at 1:40 pm 8 comments Links to this post 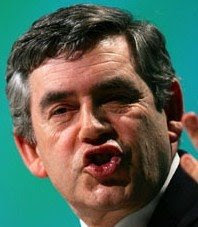 "As the slow-motion train wreck in our financial system continues to unfold, there are going to be plenty of ill-conceived rescue attempts and dubious turnaround plans, as well as propagandizing, dissembling and scheming by banks, regulators and politicians. This is all happening in an effort to try and buy time or to figure out how the losses can be dumped onto the lap of some patsy (e.g., the taxpayer)." Dr Ellen Brown. 11 April 2008

Poker is a zero-sum game. Five players of equal skill, with equal stakes can, with an equal fall of the cards, play until kingdom come and finish up neither richer nor poorer. The only way pros can make money is to introduce a new sucker every now and again, and strip him of his stash.

Banks only exist, like any business, to sell a product - in their case they are selling money. And in an ideal world, banks would take my surplus earnings, lend them to you at a small profit, and pay me a modest interest for my trouble. Of course, this would mean that they were constrained in their lending by the amount of available savings and would effectively be playing 'zero sum'. To become infinitely more profitable, they must produce cash by loaning more of it than they hold in deposits - which, in theory, leads to a limitless supply. All you need is a printing press, and Governments have been more than willing to lend them theirs - the more money there is in circulation, the more there is for hospitals and schools and all the other things politicians love to boast about.

In fact, banks have produced so much of the stuff, that as well as us all having more of it to spend than at any time in history, there's more of it about than the entire earnings of the whole world for the next 5 (10, 50, 100, pick any number) years.

The article quoted at the top explains how the trick has been done far better than I could. And there is more - deregulation of derivatives and futures markets means that nobody cares what the actual price of any commodity is as long as they can bet on it going up or down. Only a few years ago, if you traded in Chicago Pork Bellies, they'd drop on your doorstep one day if you didn't get out of the market soon enough - contract was tied to delivery. This is no longer the case - when oil futures reached $140 in unregulated markets, there were more contracts than real barrels of the stuff. Traders were dealing in only paper, betting against each other on the rising price of a purely notional entity. Now, sure enough, spot prices have collapsed dragging the share prices of oil companies, and the Dow itself, with them. Because of course, when Indices were at their highest a few short months ago, these too were cranked up just like commodities, having no real regard for their underlying values as dividend vehicles.

None of this has ever been a particularly arcane secret from followers of the Markets. But what we outsiders never knew was the scale of the scam - just how shaky the teetering pile had become and, in particular, the tipping point at which the inevitable crash would come. But how conceivable is it that our leaders were out of the loop? Wouldn't the BoE, ECB, Fed, all kinds of regulators like the FSA... mandarins at HM Treasury, US Treasury, World Bank... wouldn't they know about this flimsy mountain of paper that would bring down the world's financial system as soon as the banjo-twangers started to default on their mortgages, sending whole countries into bankruptcy. And wouldn't they have mentioned it to Brown?

Brown knew alright. He must have done. Nobody could spend so much time as Chancellor and be unaware of what was coming down the track. At best he was twiddling his thumbs, hoping for the best. At worst he was paralysed, waiting for the wreck so that he could strut the stage as Dr Ellen predicts, making the grand and hollow gestures we're enduring now. Even if it took him until Northern Rock went under to find out, he's known what was wrong and done absolutely nothing to mend the rotten system which he is as culpable as anyone of enhancing for his short-term ends and the enrichment of his cronies.

Theories abound. It's all a plot by the Bilderbergers/Illuminati/Rockefellers/Shapeshifters/ to bring about the New World Order. Who knows... so mote it be, for all I know. What I do know is that if things get as bad as they could conceivably do - with mass unemployment and shortages of vital supplies caused by a worldwide breakdown of trade, then I hope Brown, the cowardly runt, is among the first targets of the angry mob.

Posted by All Shook Up at 4:48 pm 8 comments Links to this post