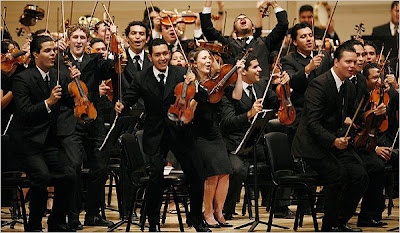 King's Lynn, at 60 miles away, is our nearest live classical music venue now that East Lindsey has pulled its arts sponsorship. Or was. Last night's concert by the City of London Sinfonia may well be their final outing to North Norfolk - victims of funding cuts thanks to slews of Government money being diverted into the insatiable Olympic maw.

It was a scrappy and disjointed affair, too. A couple of (deservedly) minor works for mandolin sandwiched between some indisciplined Bach (reports our Arts Correspondent, Tarquith Vonackle).

I found the whole thing dispiriting - not just the performance but the morgue-like ambience.... the audience being twice the age of the players, for one thing. I don't know whether it's because most people don't get into classical music until they're pensioned off, so that it's a rolling cohort being refreshed by newly-qualified bus-passers just as the ultra-oldies drop from their perches - or whether, worse, the age-group is getting greyer by the year because young 'uns aren't joining at the bottom any more.

Sitting outside a bar in Malaga, in Feb, I was thinking the Boho girl chatting at the next table looked familiar. Eventually (the flower behind her ear was the clue), I realised it was the soprano who'd sung in Mahler's 4th an hour or so before. Then, she'd been wearing a stately yellow gown - her friends, who I also recognised as orchestra members, had been in their white-ties and tails. Now, in their jeans and teeshirts, laughing and smoking, you'd never take any of them for the stiff-shirted automatons who had earlier complemented the elegant formality of the Teatro Cervantes so perfectly. They came onstage. They played. They took their ovation and went off - with never a word and barely a smile.

Kids like these come out of music college full of zing and verve and must feel flattened by the dead hand of 'the way we've always done it'. The music deserves better than this.... It'll never have enough of an appeal to generations hooked on the trappings of immediacy - but I'm having a String Quartets craze on my Mp3player at the mo... the notes pop and fizz around inside the head in a way that even Beethoven could never have dreamed when he wrote them, so....

It needn't be for the few. I hope lessons can be learned from the queues of people killing for tickets to see the Simon Bolivar Youth Orchestra - that it can be cool, it can thrill, it can pull the crowds in when it's done with enough energy and enthusiasm. Otherwise, oblivion awaits.

Posted by All Shook Up at 5:02 pm 0 comments Links to this post 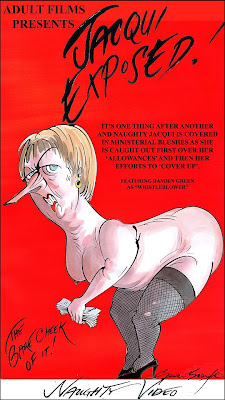 As a part-time bodhisattva (slightly lapsed), I've had to cut down on the blogging... I've realised that the karmic consequence of banging on about the awfulness of Life in General is an almost permanent sense of irritability. It's not even as if it gets results - unlike the mighty Guido. Our MP is the ancient and redoubtable Sir Peter Tapsell, and unseating him - or even suggesting that he might change his long-held views on anything - is as unthinkable as camels on Skegness beach. Sitting in the gentle Lincolnshire sunshine, pecking at a bowl of cockles and a beer, it's as cosy and safe as the Fifties ever were. So why spoil the pleasures of a vaguely contented life in the timeless Fens, where we're untroubled by the nastiness of the Outside World unless we read the papers.

Worse though, for those likely to be actually featuring in them. Just imagine what it would be like for a decent respectable woman from, say, Redditch, to spread marmalade on her morning toast, pour herself and hubby a coffee, settle down with the Sunday Times, and see herself depicted as viciously as above. It would make most reasonable women want to quit public life. Especially if they suspected it might be cruel but accurate.

Karma... none of us can avoid it. The neat thing about Zen Buddhism is that there aren't a lot of hard and fast rules to learn... Buddha said that he doesn't make the Laws of Nature - just reveals them. As one of his predecessors pointed out, "We are what our deep, driving desire is. As our deep, driving desire is, so is our will. As our will is, so is our deed. As our deed is, so is our destiny." Master that and off you go - nirvana awaits without the need for further formality.

Jacqui has no-one to blame but herself... £23K actually isn't all that generous an allowance for keeping a place in London for a year - but she had to go and try to enrich herself with it, the fool. So.... karma got her by the neck. It's just the way things are that's all... "As you sow, so shall you reap. With whatever measure you mete out to others, with the same measure it shall be meted out to you", as Jesus put it. Jacqui Exposed, as Scarfe does.

Posted by All Shook Up at 12:44 pm 9 comments Links to this post